In the late sixties and early seventies, yacht designs underwent a rapid evolution, the result of numerous experiments. The interest in sailing yachts was immense. These were the days when the predecessor of the Ballad, namely Joker, was designed. Rolf Magnusson the famous sailor and sailmaker designed the Joker in the late sixties. In 1968 Rolf launched the Joker S30 and in 1969 he raced it intensively and attracted a considerable amount of interest. Earlier this year Rolf participated in the World Cup for Half Ton yachts held at Sandhamn where he won a bronze medal in the Half Ton Cup, beating most of the world’s elite racers.

Many considered Joker S30 to be the ultimate racing yacht, it was speedy, modern, spacious and good- looking. Sales took off and Arvika Plast (Arvika Resins –  Arvika is a municipality to the north-east of Gothenburg) sold 30 yachts in 1970, even before the sailing season began. The Joker became popular enough to make others copy its design, resulting in illicit varieties labelled as More and AH Cruiser. A set of moulds was also put aside in Arvika, remodelled and used to manufacture boats known as Comfort 30.

In 1971 Joker experienced a breakthrough after some improved and it was renamed “Ballad”, a name that can be used and understood in many a language. At this time it was Albin Marin in Kristinehamn, who mass-produced the Ballad. It was purchased by Germans, Danes and Norwegians as well as by Swedes and subsequently by sailors of other nationalities. The Ballad became one of the most sought-after one-design racing yachts of the seventies. 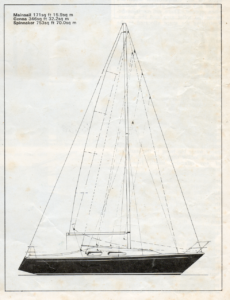 Albin Marin went on to produce 1500 Ballads before filing for bankruptcy in 1982. The moulds were acquired by BODA (Ballad One Design Association) as well as the rights to manufacture and sell. For a few years, BODA leased these moulds and the yacht was built to order by a number of Danish wharves until 1987. Approximately 25 yachts were built during this time, all belonging to a series that with 2000. The last set of moulds was scrapped in 1998. (Hatches and rudder can still be manufactured though).

Ballad –  the ocean cruiser –  has now more than 40 years experience of the wet element and is still going strong, and growing in popularity. It is still to be determined what age a Ballad may reach

Ballad –  excellent for both family cruises and for long distance travel

Not only did the Ballad perform well in races; it also turned out to be an excellent family yacht –  even for long distance cruises. There are lots of examples of Ballads crossing the oceans. Quite a few of them were sailed to places like the Shetland Islands, Iceland, Scotland and the Caribbean. A few also circumnavigated the globe, the most well-known being, Herbert Jivegard, “world famous in Sweden” as “Papa Blondie” who cruised around the world between 1979- 1984 in his Ballad 1047, named Silvia. In his book “Dreamtravels” he shares his adventures with the reader. “Papa Blondie” has been one of the more active members of the West Coast Circuit of the Ballad Club. During the Gothenburg Boat Fair in 1996 the Silvia was put on exhibit and generated a great deal of interest. 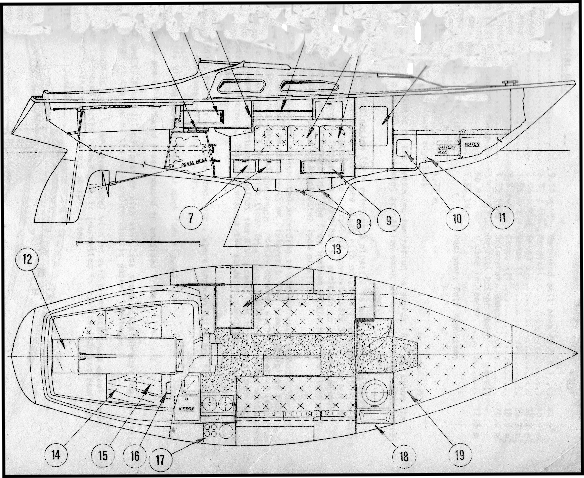 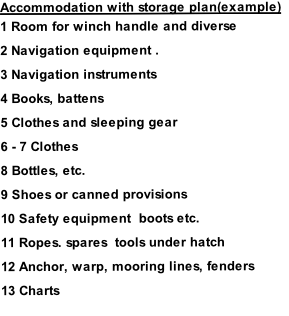 Comes in lots of colours, white being the most popular

The Ballad was built using a number of gel coat colours e.g. yellow, red, blue and white. Amongst the older Ballads blue is the more common colour but several of those were repainted white. After 1976 all Ballads were built using white as the standard colour, unless the buyers specified another colour.

The ballast, consisting of lead, is encapsulated in the GRP (glass reinforced plastic) keel. Moderate encounters with rocks and reefs usually only result in minor damage and this is easily mended. The advantage of this keel design is the fact that there are no bolt joints that could result in leakage. Time has also shown that the keel design is well dimensioned.

The Ballad responds nicely to the helm, this is due to a large proportion of the rudder area being located at the bottom. This design provides for an efficient grip even at a large angle of heeling. This is a feature of the Ballad which few other yachts can boast.

Various different manufacturers built the rudders and one should be especially cautious when it comes to hollow rudders. When lifting the yacht ashore in the fall, a small hole should be drilled in the bottom of the rudder which will allow any water to escape, thus preventing frost damage (and the resulting expansion of water when freezing to ice) from causing any damage.

The deck is of a sandwich design, which varies somewhat throughout the years of manufacture. Some older yachts have suffered from delamination problems, poor adhesion between the construction materials. Such problems may alert the owners by a quirking sound when walking on deck. In practice, this problem is of no consequence but is easily remedied by injecting foam Many Ballad owners have mounted winches and line stoppers on the cabin roof in order to make halyards etc. accessible from the cockpit. Advice is available in the Swedish Ballad Club’s “Practical Hints”.

Many Ballads manufactured up until 1978 were equipped with masts from German Ambau and English Proctor, others have masts made by the Swedish company, Selden. The mast stands on the keel (passing through the deck) resulting in a simple and strong standing rigging.

The interior design differs somewhat between older and younger boats. All Ballads have the customary design with two berths in the fore-cabin, locker to port and heads to starboard including a wash basin and (sometimes) a septic tank, also to starboard. The starboard side of the cabin contains a berth, pantry and a wash basin. On the port side, there is a berth, navigators table and a quarter berth.

Ballads manufactured in 1979 and later have a cooker with a built-in oven. This is, nowadays common in all Ballads (retrofitted by their owners). The pantry is easily redesigned to accommodate an oven.

Some older Ballads are equipped with sea berths above the regular cabin berths. Some of the sea berths are fixed structures making a considerable

difference to the interior layout. For example, there will be six berths rather than the normal five and the navigator has to stand when working at the chart table. Some of these older Ballads have foldable seaberths, which means that they don’t differ very much from their younger counterparts. Still, most owners of older Ballads have rebuilt the cabin interiors removing the sea berths. The interior structures are made from mahogany up until 1978, later designs use teak.

The Ballad was consistently equipped with auxiliaries from Volvo Penta. During the first years, starting in 1971 the MD 6A and MD6B of 10 hp were installed. The difference between these two is that the A- model has a Dynastart (combined starter and alternator) whereas the B- model has a conventional starter. The model MD 7A of 13hp was introduced in the 1977- 78 series of yachts. The MD 7B with its power increased to 17hp was introduced in 1979. Those approximately 25 Ballads manufactured in Denmark in the eighties were equipped with Volvo Penta 2002 (18 hp). Today, many Ballad’s auxiliaries have been replaced. Several brands have been tried, for example, Perkins, Beta, Yanmar and Nannidiesel. These replacements all weigh less than the older engine and this weight difference has to be compensated for if the particular yacht is to meet the requirements of the Ballad One Design Rule. Usually, these more recent designs are more powerful than the old 10- hp auxiliaries, which is an obvious advantage when headwinds and rough seas take their toll.

Freshwater-cooling was never installed as standard by Albin Marin but was subsequently installed by many owners. This usually takes place in combination with a major overhaul or engine replacement. Installing freshwater cooling improves operating conditions and prolongs engine life by preventing any rust from attacking the cooling channels. It is not possible, at this time, to predict exactly how much the auxiliary length of life is prolonged by installing fresh- water cooling. The length of life is, above all, dependent on how well winter conservation is carried out and how the auxiliary was utilised. Most Ballads still depend on their original installations with or without freshwater cooling, and it is safe to say that those auxiliaries who lack fresh- water cooling will rust.

The Ballad –  the ocean cruiser, which according to the recent EU rules is rated as “ocean cruising”, is well known as a stiff yacht, doing especially well on long beats. She behaves with confidence on the ocean and exhibits all the appreciated characteristics of an ocean cruiser, sparing her crew any unpleasant surprises. Admittedly, in rough conditions, some may say that she’s somewhat heavy on the helm.

Many Ballad owners consider the Ballad to be a fantastic boat, well adapted to most conditions and definitely safe in harsh conditions. In a tough run in coarse seas, she will maintain her course well. A comfortable feature, i.e. when family racing, is the stiffness eliminating the need to reef early. She carries her full set of sail (up to approximately 9 m/s) with ease. Making the Ballad run fast in lighter winds, however, presents more of a challenge.

(c.f. the Swedish Ballad Club’s “Practical Hints” unfortunately available in Swedish only).
A Ballad Forum to discuss various aspects of Ballads. Although Swedish based it is in English – http://balladklubben.se/balladexchange/